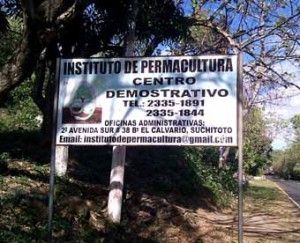 Back in January I visited El Salvador to deliver an ENCA donation of US$500 for emergency office expenses to the Permaculture Institute of El Salvador (“IPES”, by its Spanish initials). I dropped the money off at their office in the beautiful colonial town of Suchitito, but then they were kind enough to invite me to spend a day and night on their Demonstration Centre a little further into the countryside. There I was given a whirlwind tour of the site and the chance to learn a bit more about how IPES uses permaculture to find intelligent solutions both to environmental problems and the economic dependence faced by their country’s farmers.

I had heard a little about this Demonstration Centre from other ENCA members, and was excited to have the opportunity to visit. The basic principle of permaculture is to develop technology and agricultural methods that maximise productivity from local resources, use no or very few inputs from outside the local ecosystem, and in return generate no or very little pollution. A farm or community using permaculture aims to be as completely sustainable and self-sufficient as possible, without the need to buy things to maintain production, and without contaminating its environment such that over time it becomes less habitable or productive. Although the ideal of 100% self-sufficiency may be unobtainable, the idea is to replicate the success of the Earth as a living ecosystem that maintains itself indefinitely. 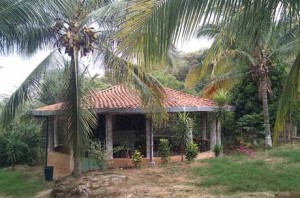 The Centre includes this conference building for hosting campesino visits

The key to this process is recycling waste products and reusing what remains productive in them, and taking advantage of the different properties of plants to find solutions to any problems that are encountered. IPES’ Demonstration Centre is where they experiment with such methods. When they encounter problems here – such as a disease affecting a plant – they focus their human intelligence and resourcefulness, with incredibly careful attention to ecology, inputs and outputs, to find a genuinely sustainable solution. Being able to see the products of this process makes it an extraordinary place to visit.

The centre serves to demonstrate these methods to groups of local “campesino” farmers, to help them learn how to apply the same principles in their work. More than simply promoting farming practices that are more ecological, IPES’ mission is to provide campesinos with an alternative to the cash-cropping that has become their way of life, at the cost of their independence. 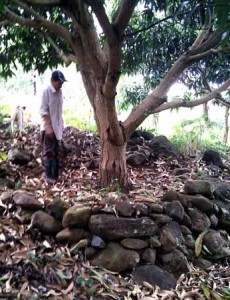 I was shown around the centre by Efren, one of the paid workers there who as a campesino had taken a year long IPES course and who since then has been wholly committed to developing permaculture both on IPES’ plot and for his own food production. The Demonstration Centre is 20 acres, split into different sections. The first we encountered was dedicated to fruit trees – especially mangos, papayas and avocados. Much of El Salvador is steep mountain terrain with thin soils, which means that flooding and erosion are a big problem in the rainy season. Trees are an essential part of dealing with these problems, as their root structures hold soil in place all year around and also retain water. Efrin showed me how IPES have enhanced the potential for planting trees in flood prone areas with simple semi-circular rock walls around the downhill half of each tree, that hold the growing roots more firmly to the hill, and help trap water for the tree to use.

Elsewhere in the Demonstration Centre, more dramatic earthworks are used to deal with the problems caused by rain-season water run-off. Planting areas are built into flat tiers that follow the contour of the hill, making flat beds for planting that retain water and soil. In areas without plants, big trenches between 1 and 2 metres deep and wide, and also following the contour of the hill, slow water run-off. The water stopped in the trenches then has time to percolate into the soil and feed the plants further downhill – the trenches both reduce the destructivity of the water and deal with its scarcity in the soil.

The second section we saw was dedicated to experimenting with different planting schemes. Efrin pointed out and named 12 plants that were being grown together at that time, producing a varied and 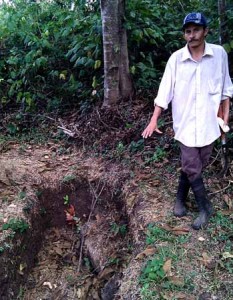 Efren and a small water retaining trench, that also slows destructive run-off in the wet season

nutritious crop for the farmer. The mixture is not chosen simply for taste, however – each plant contributes to the ecological processes that maintain fertility of the area, recycling one part of the nutrient mixture required to fulfil all the requirements of a sustainable local system. This contrasts with modern farming “monocultures”, where vast areas are dedicated to a single plant species – all other plants being killed by chemicals the product-plant has been bred to be resistant to. In monoculture, the nutrients required of the product species are rapidly sapped, without any cohabiting plants that can recycle or reintroduce those nutrients – fertility can then only be maintained by application of more chemicals.

One of the most important plants Efrin showed me here was Yuca, a staple for its edible potassium rich tuber, which supports the growth of other plants by oxygenating the soil with its roots. A tree named Berja is used as a legume – a very important type of plant for ecological farming, which fixes nitrogen into an organically usable form, naturally fertilising the soil with this vital nutrient each year when it sheds its leaves. Pineapple plants were also in abundance, their thick low lying growth used as natural walls to hold soil terraces together, protect from wind erosion, and provide a habitat for beneficial insects.

Uphill from the planted areas of the IPES plot is an area left uncultivated to maintain its woodland. The trees here protect against destructive rainwater run-off and sequester water in the soil, and the fast growing varieties are also a source of building timber. The area is also a source of the ingredients needed to produce permaculture’s most valuable product – natural compost. Whenever organic material is left to compost, micro-organisms break it down and complete cycles which convert the ecosystem’s resources back into the nutrients required by plants. Developing compost is the principle means by which an area’s soil is recycled, and its productivity maximised without external inputs. 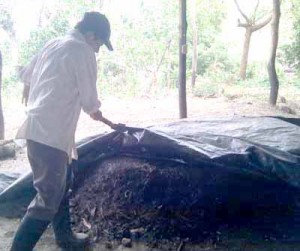 Bokashi compost is cultivated under a tarpaulin for 18 days

Efrin told me that the uncultivated “mountain soil” from the woodland area is full of the micro-organisms that compost soil, and is used as a sustainable kick-starter to maximise IPES’ composting efficiency. He showed me several composting methods, the most efficient of which is carefully managed “bokashi” compost. For bokashi, soil enriched with natural yeast and controlled amounts of water ferments vigorously, naturally generating a temperature of 80 degrees celsius that acts to sterilise harmful organisms. The heat then turbo-charges the beneficial micro-organisms, which compost the soil completely in 18 days flat. To get involved I helped “turn” their current bokashi pile – aerating it with a shovel to let the heat out.

Permaculture and Socio-economic Problems – The Fight to Regain Independence

Permaculture is not simply about finding ecologically harmonious farming practices, it is about finding sustainable, local solutions to all varieties of human problems. After Efrin left, I talked to another staff member, Miguel, and he explained to me IPES’ project to develop better cookers for people currently using unhealthy and inefficient open fires. The IPES cooker is made by the family themselves, mainly from locally available clay, and reduces the amount of firewood required, and the health-risks from wood smoke. Much more about projects to improve Central American cookers can be read in two articles in the next ENCA newsletter, ENCA 58, to be released very soon! 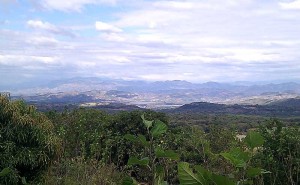 The top of the IPES centre offers an incredible view over El Salvador, showing the steep mountainous terrain that El Salvadoran farmers struggle to make a living on

The problems IPES is trying to address are not small, locally isolated ones. In El Salvador, as in the rest of the world, farmers trying to make a living increasingly find themselves unable to compete with big plantation farming and industrialised methods. In order to increase productivity, farmers have moved away from production that first feeds themselves, and increasingly use monocropped fields of “High Yield” seeds varieties of crops for the international market. These seeds, developed and patented by international companies such as Monsanto, require intensive farming methods with specific fertilisers and other agrochemicals sold by the same companies. These pollute the soil and surroundings, and sap it of its natural productivity to a point where farming can only be maintained with a constant input of chemical fertilisers. At the same time, the seeds – as the trademarked brands of the manufacturers – are bred to be infertile. Farmers can’t produce their own seed from their produce, and each new year requires a reinvestment not just of fertilisers but of newly bought seeds.

The productivity of such farmers does not support the diets of the producers themselves, it simply feeds the international market – 95% of El Salvador’s consumed food is imported. The end result is that, in their attempts to maintain their livelihoods, campesinos get trapped in a cycle of dependence on the seed and agrochemical companies. Their land becomes dependent on their chemicals to maintain fertility, while the campesinos end up with financial debts to the companies, demanding repayments that require them to maintain their cash-cropping. Meanwhile, market price fluctuations mean that the campesinos can never guarantee enough money to keep food on their plates, and the build up of toxins in people’s environment leads to lack of clean water and increasing health problems.

IPES’ goal is to help El Salvadoran campesinos move away completely from this dependence – on both the seed and chemical companies and the global food market in general – and attain food-security so that their families don’t go hungry. At their Demonstration Centre I met several IPES staff members – all people extremely conscious of and obviously saddened by the problems faced by their nation’s people. IPES has a palpable sense of commitment to making permaculture work as a nationwide solution to such problems. It’s a great place to visit, perfect for those with green fingers and interested in practical solutions to social problems, and they are currently looking for international volunteers. If you’re interested the first place to go is their website, here, and you can email them at volunteer@permacultura.com.sv. 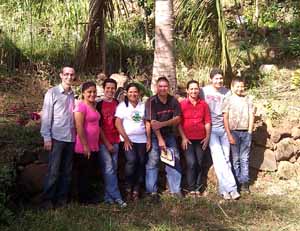 Myself and several of the IPES members at their demo centre