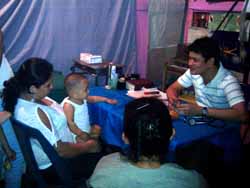 OK, so it’s been a very long time since I’ve been able to update my blog – I don’t think I’ve ever been as busy as I found myself in Nicaragua, which I left 2 weeks ago to start travelling Central America. My time in Nicaragua, especially the last 2 months, was mainly spent working in a local health clinic in the town of El Viejo, the Clínica Xochil. It was an extremely interesting experience, with many challenges and many many things to learn, and this blog article gives a bit more detail on what I did and learnt there.

The clinic provides consultancies for patients in general medicine, paediatrics and gaenocology. It focuses on the health and rights of women in El Viejo, including fighting cervical cancer and supporting victims of domestic violence, two problems lamentably common in the El Viejo area. It provides its services to the poorest of the poor in El Viejo, generally for a very low fee, and for those unable to pay its fees are waived. The charges just about pay the doctors but provide very little additional money to expand its work or pay extra staff.

It really took me about a month to get to grips with the many challenges faced by the clinic and get a clear picture of how it worked. I realised just how important external funding is when an organisation is trying to provide its services to the poorest. With no money for a full-time staff member at the clinic, one of the most apparent apparent problems for Clínica Xochil was being open at consistent hours. I was staying with the director of the clinic – and its lifeblood for its 14 years of existence – Edilbertha, a well-known person in El Viejo who was constantly juggling the clinic with helping other people with problems all over the town. Together, we held a meeting to coordinate who would be in the clinic when, in order to keep it open to receive patients whenever they arrived, and take some of the pressure off Edilbertha. 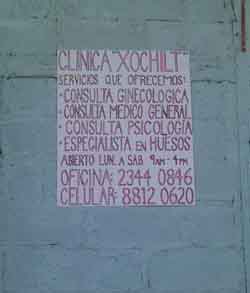 The first concrete piece of work I did for the clinic was this sign!

To benefit from the more consistent opening hours, I also helped the clinic with advertising themselves to bring in more patients. The very first piece of work I did for the clinic was putting a permanent sign outside the building so that even when it was closed, people had the information they needed to phone and book appointments. Then, through December we planned a Christmas “Patrocinio” event, to deliver toys to children in some of the poorest families of the communities close to the clinic, while raising the profile of the clinic. Very kind donations from several ENCA members and their families made this possible, to buy the presents and the piñatas that formed the basis of the event. After that, I continued making several sets of pamphlets and posters throughout my time there, which we stuck all over El Viejo, and gave out at any opportunity. From January on there was definitely a marked, though slow, increase in the patients coming in to visit the newly re-invigorated clinic.

Without a doubt, the clinic’s biggest need, and one of its most challenging, was and is for more sources of money. From January onwards much of my time was committed searching for additional sources of funds, using the internet to find potential funders and approaching them by email. We had some great early luck when an organisation that I contacted in the United States responded that they actually had a volunteer project visiting the area that same week. Within a week of starting our search we had a large group of US volunteer visiting the clinic, who not only donated some money on the spot but (we hope) included some people that might end up returning to the clinic in the future. With that success, we realised how beneficial building simple face-to-face solidarity links can be for a small organisation such as the clinic.

Some time later we had what I hope will turn into more luck with another group, this time a twin town link between El Viejo and Norwich in the UK. Because they already had several yuears experience working in the same town, there was some common ground to build on, and opportunities to spread some requests with ideas of the clinic’s needs, in the hope of finding some more funding. This new connection was made just before I left, but it seemed to be opening yet more doors just in my last few days in Nicaragua – through the group´s Nicaraguan contacts Edilbertha was suggested new ways to approach the El Viejo municipality directly for support, which could lead to long term government funding at last. 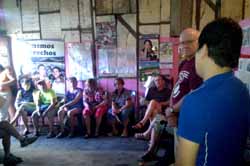 My search for funders continued through January and February, but was very pot luck, with mountains of emails sent without any response. Increasingly in February, my last month, I tried to focus more on providing Edilbertha and the other regular clinic staff and volunteers with training and advice on how to develop their fundraising and communications after I left.

Computers are still very rare in homes in El Viejo, and in general people there have far fewer opportunities to develop their computer skills. Helping Edilbertha and the others get more comfortable with things like Windows, Word, email and Facebook was something valuable that I and any other volunteer from England had the capacity to do. To expand on this, nearer the end of my time I gave presentations into what sorts of communication foreign funding organisations – such as ENCA and others that I’ve worked for – respond to best, for reports, proposals and email communication.

There were many challenges to face at the clinic, starting with just how much work there was to be done, and still is to be done, to allow the clinic to deliver all the services needed in its area, with the very few resources it has. As I’ve mentioned in earlier articles, the volunteer placement was set up directly between Edilbertha and myself, so there was no established plan to follow. Working out the best ways I could help, and then sticking to them, was one of the biggest challenges throughout. I quickly learnt there was no shortage of work, in fact from the very first week it seemed I was working more hours than I’ve ever worked in a job. But with very few people to do all the things needed, it was also difficult to stay on any one task without getting pulled into other things. This was true even more so for Edilbertha who was always needed in a million places at once – in her home where she had grandchildren and housework to look after, in court cases where she often volunteered to help women who were victims of abuse, in her own community where she was fighting to ensure promised government projects were delivered correctly, and countless other causes. Getting things done, and getting the outcomes we wanted with so few resources and time, was often a frustrating process.

Through December and January in particular, the clinic was receiving shocking numbers of women refered by the police for psychological treatment as victims of domestic abuse, a huge  problem in Nicaragua

But despite the challenges, working with the clinic was a fantastic and richly educational experience. Just being so involved in the work of a clinic in the second poorest country in the Americas (after Haiti), was an eye opener into the realities of healthcare in poorer countries. I am planning on starting a medical degree when I return to England, and was able to get more direct medical knowledge from the doctors I met and occassionally shadowed. All the while of course, I was slowly building up my Spanish.

More than anything though, what you see working in Nicaragua is not just how difficult work is when resources are scarce, but what can be done even in a country with very little, just through the support of the people. The Nicaraguans that I met are open and friendly, full of ideas and the drive to help one another. Places like the Clínica Xochil run on this – without the nurses, doctors and other people working there for no or very little money, the clinic would be nothing. But more than this, I saw thousands of little helps being offered to the ever working Edilbertha, who knows thousands of different people and ways to ask for help. While she was out helping whoever she could however she could, she would also be finding small favours to help the clinic – people to help with broken computers, lend a marquee and tables for an event, up to the main teaching college willingly letting me use their classrooms for my computer classes. When asked, people and organisations helped, and things happened. This struck me as markedly different from the institutional barriers, suspiscion and indifference faced in England. For all that Nicaragua is poor in economic terms, it is a place extremely rich in humanity, that felt easy to access even for a foreigner, and for me made it a very special place to spend time and work.

If you want to see a little more of the Clinic itself, they now have a Facebook page – click here to go to it – and it really would help its profile if people “liked” it.

Finally, I intend to revisit the clinic before returning to England, and again in the future. If anyone after reading this would like to support the clinic, or is thinking about volunteering there, please contact me at spiritsxxi (at )yahoo.co.uk and I can help arrange this. 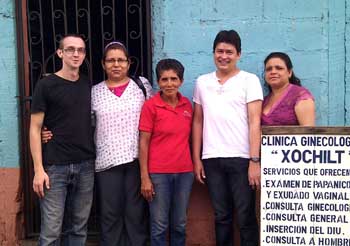