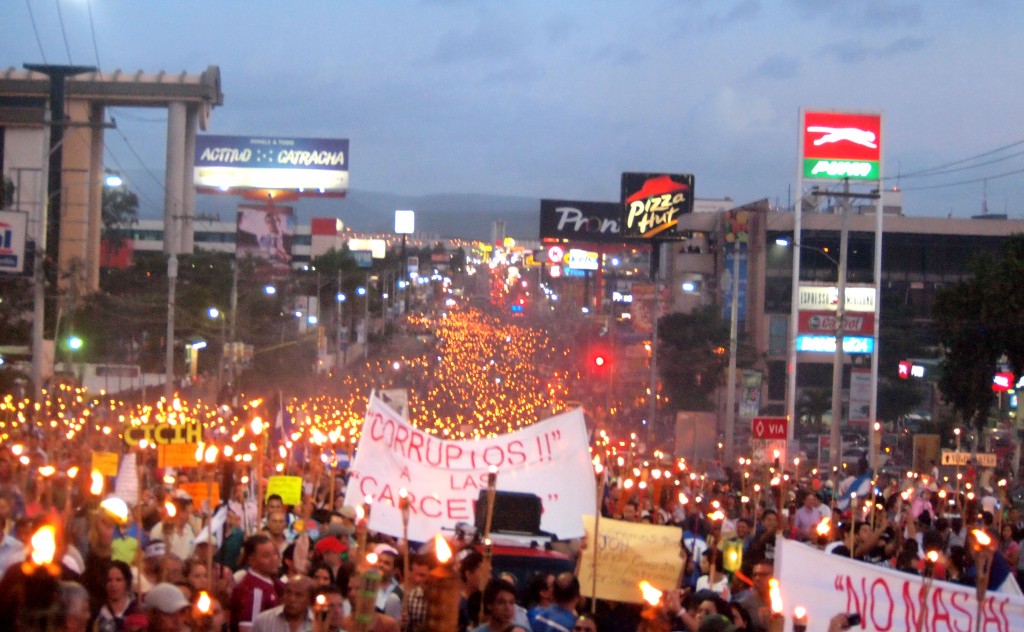 ENCA has now started an online petition to make it easier for UK residents press our government to support Honduras's people. Please go to this petition and sign now, and use the links there to spread it further with email, Facebook and Twitter! If you have more time and are UK-based, please follow the instructions at the bottom of the article to send a version of the letter to your local MP, which will multiply the impact.

If you're in the US or Canada, please use the links below to send a letter to your government representatives. ENCA also has a civil society version of the letter that we are circulating to organisations to sign. Please contact us to add your organisation to this letter.

On Thursday I reported on the “Antorchas” Movement – also known as “Los Indignados” – who are demanding an end to the corruption rife in Honduras. Honduran journalists have revealed that hundreds of millions of dollars were embezzled from the Honduran Health System, and supported the election campaign of president Juan Orlando Hernández's National Party. At least 3,000 have died and many more are suffering from lack of health care as a result. A mass movement bringing together all sectors of the population is demanding Juan Orlando Hernández (known as “JOH”)'s resignation, and an independent International Commission against Impunity in Honduras (“CICIH”) to root out all the country's corruption.

On Thursday I visited a new incarnation of this movement – a group of young Hunger Strikers near the Presidential House, who say they will stay until the CICIH is established, or until their death. The first strikers started on Monday (22nd June) and are still striking today. More have joined them since. On Friday, the hunger strike site became the end point for the largest Antorcha demonstration yet – and the largest demonstration the country has seen since those against the 2009 military coup which brought the current repressive regime to power.

As I reported on Thursday, there was a great deal of anxiety about the possibility of violence on this march. Although the Antorchas movement is peaceful, and the Hunger Strikers cite Gandhi as an important influence for their strike, the Honduran authorities and JOH's National Party are known to use violence. It was rumoured that the party was going to stage a counter-demonstration at the same time, in the same place, in an attempt to foment discord and turn the protest into a disaster. More worrying still was the authorities' response so far to the strike – within a day of it starting, the police had blockaded the first three of Strikers behind a fence and police line, preventing anyone entering to support them. Amnesty International representatives have described this as a breach of the strikers' human rights, and an attempt to crush their spirit in their peaceful and legitimate protest. On Friday, the police blockade continued to be maintained, over the week more Hunger Strikers and their supporters had set up outside it, but behind them were fences and lines of armed riot police.

Together with COPINH – an indigenous organisation and part of the resistance since 2009 – I joined the demonstration from its start, at 5pm on Friday, 26th June. The grand highway we were on filled with people carrying burning torches, the symbol of the “Antorchas” movement. When the crowd moved, it was a river of burning lights that stretched into the distance both in front of and behind us. The march snaked for an hour and a half through the wide streets back to the area of the Presidential House, with music and dancing from trucks laden with speakers, and animated with chants of “Fuera JOH” (“out, Juan Orlando Hernández!”), and “Que es la ruta? Saca a este hijo de puta!” (“What is the route? Get this son of a bitch out!”). There was no organisation on site equipped to make an official count, but reports estimated there were between 120 and 400 thousand protesters, and they completely filled the route. Everyone agreed that it was at least comparable to the biggest protests yet in Honduras, back in 2009.

As we got close to the Hunger Strikers, I could see the dark shadow of army snipers on the corners of buildings above us. The crowd filled the space outside the police blockade with the noise and anger of the demonstration. Looking through the police fence I was confronted by the sight of thick lines of Riot Police reinforcements that had filled the space, shoulder to shoulder, about 30 metres back from the fence. Climbing a wall on the other side of the road block, I was amazed to see that the 500 strong police force wasn't alone. Behind it were twice as many soldiers, in their own lines, including the hulking shape of one of the 8 water cannon trucks that the Tegucigalpa units have. Talking to people at the site, there was excitement at the success amazement at how filled the streets were, but the atmosphere was tense – it seemed violence was inevitable. 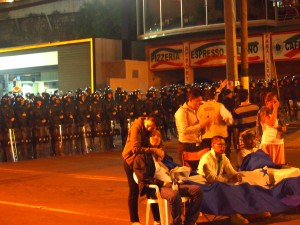 Through the police fence, the hunger strikers isolated inside are defiant in front of the wall of police

But despite the masses of people, the organisers and protesters demonstrated incredible self control and determination, and the protest remained peaceful. A rope line held the main crowd a little back from the police fence – also protecting the hunger strikers outside the fence from being crowded. No mass counter-protest emerged to confront the Indignados. After several hours, and the night getting longer, the crowd was thinning out. It was with a sense of relief – but no small amount of surprise – that I saw the army lines start to march away as well. The protest had passed completely successfully, and almost completely without violence. 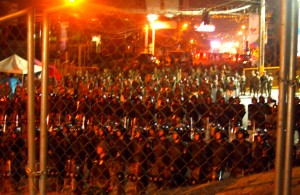 The day afterwards I discovered there had been a few incidents. Two tear gas bombs had been thrown into the crowd, including one very near the road block, but thankfully no one was seriously hurt. At the tensest point, 2 drunk men got into the crowd clamouring to storm the roadblock, and started throwing things towards the police. The crowd in general remained unperturbed, and the Indigando organisers chased them away – reporting to me that the agitators had a gun. Earlier, they had caught people spreading petrol on one of the bus stations along the route – booby trapping it to set alight when the burning torches passed. Everyone unanimously reported that these were manifestations of National Party or military saboteurs, attempting to foster violence and give the authorities an excuse to crack down on the protest.

What Next & What Can You Do? – National Responses and International Support

In the end, the day demonstrated the incredible force of the Honduran people's will power – to demand real change in their country, and to do so in a peaceful way despite the violence against them. What has been the response? So far, there has been silence from the authorities. As I reported on Thursday, president JOH has attempted to placate the protests by offering a national version of the CICIH Commission. This is a completely hollow gesture – Honduras' corruption is endemic and only an international, independent commission stands any chance of cutting through it. 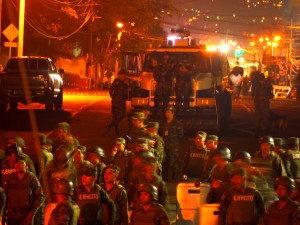 Yesterday (Saturday 27th June), the 3 hunger strikers remaining inside the road block were forced to leave it. After almost a week without food, two instigators of the strike, Ariel Varela and Miguel Briceño, reported that in their weakened state and isolation they had been assaulted by police. Government-owned newspapers such as El Heraldo have reported that the strike has been called off, but I can confirm that this is not the case – the 3 strikers have merely moved to join those outside. In fact, more strikers have been joining them – there are now at least 8 people on hunger strike.

The Antorchas' fight and demands are not simply Honduran matters, they are international and they demand an international response. The International Commission against Impunity in Honduras – CICIH – that they demand would be a Honduran version of Guatemala's CICIG. The CICIG is an ongoing and until-now unique UN-backed process, the result of a similar story of corruption, repression and popular demand that has played out in Guatemala. It began in 2007 and has recently resulted in the resignation of Guatemala's ex-vice president, among ongoing criminal cases.

The Honduran people's demands need international support to press the UN to realise the CICIH process, and to demand that Western states hold Honduras' government to account. Until now, our governments' record in Honduras is shocking. The current Honduran regime came to power in a military coup, which was then given a whitewashing of democracy in elections in 2010 and 2013. EU observer missions have reported that the elections were fair, but then individual members broke ranks and reported numerous instances of National Party vote buying and intimidation, and complete saturation of the media with their political broadcasts. The new revelations that have ignited the Antorchas demonstrate that the funds the party used for these tactics were stolen from the public health system itself.

And yet, within a year after the coup, the USA, Canada and the EU started pushing ahead with economic agreements in support of the corrupt regime. The corrupt government has declared the country “open for business” – a model of low taxes and regulations to attract “investors”. The reality is that the international businesses have gained access to cheap resources for exploitation, while leaving almost no material investment in the country – just money in the bank accounts of the government officials brokering the deals. While the military threaten the peaceful demonstrations, the US continually escalates military support to the country as part of its completely ineffective regional “war on drugs” – and to maintain the “business-friendly” government.

Demand Change from Your Country

Please take action now to add your voice to calls for international pressure in support of the Honduran people's Indignados movement and their calls for an International Commission against Impunity (CICIH). You can do so in a variety of ways, and I am working to establish some petitions to make this process easier.

Download this general letter to US, Canadian and EU governments demanding they support the Indignados. This can be posted or emailed directly to your government representative (see below for how to do this easily in your country).

Please support this cause by encouraging more people to get on board, using Facebook and Twitter, and linking to this web (see the bottom of the webpage for ENCA's social media site, and on twitter use hashtag #FueraJOH).

In the UK: Our letter has now been made into an online petition to the UK government and the UN, which you can sign very easily here. If you have time, also find your member of parliament on writetothem.com and copy and paste this letter into it – this is very easy and will magnify the impact! Please feel free to personalise the letter if you want to.

In the US: Find your Congressional Representative here and your Senators here, and send them this letter, or your personalised version of it.

In Canada: Find your Member of Parliament here, and send them this letter, or your personalised version of it.