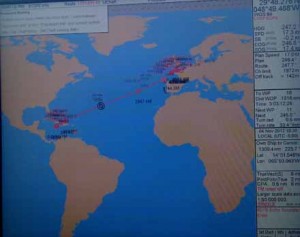 On the bridge, you could see exactly what the ship’s travel involved – at this point we’re just past half way across the Ocean!

I am now back on land in Central America, after a very sedate 18 days at sea on the ‘BF Ipanema’ cargo ship. More than the hitch-hiking, this voyage was something I was anxious about when planning my trip – how would I cope with such a long time on a ship, with no one but crew to talk to and surrounded by thousands of miles of very deep ocean?

In truth though, there was nothing to worry about, I came to the ship prepared with a lot of things to read, including Spanish learning books to help prepare for Latin America. Armed with these bits, the journey was mostly just a good time to relax, sub bathe (as we moved into the Caribbean), read and ponder – a rare opportunity to have no outside responsibilities for 2 whole weeks.

I was one of 3 passengers on the trip, and there were also 17 crew members – 5 officers all of whom were Ukrainian, and other seamen who were either from Burma or The Philippines. The officers are a pretty taciturn bunch of people, for the most part – not a great source of conversation, but they did arrange for me to tour through the bridge and engine room. The other seamen were more friendly and open about their lives, but in general they spent most of their time working, and I spent most of my time reading and sun-bathing and enjoying the solitude. 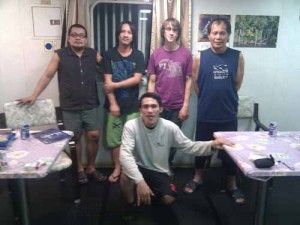 Me with 4 of the Filippino crew, in the mess

The journey as a passenger would suit certain people better than others, and the 2 other passengers demonstrated the difference in how people fit into it. They were both retired Germans, and one of them had worked his life as a ship’s engineer, and was on a 6 week round trip – he clearly loved the solitude, the free time and the sea itself, and didn’t want much more than that. The other passenger was moving to Latin America and had decided to take a ship, but wasn’t prepared for the sheer empty duration of the trip, and spent much of it drinking beer and repeating how much he should have taken the plane!

Whenever possible, I took a chair from the rear, habited end of the ship, up the long walk along the side of the ship past all the containers, to the foredeck. Here there was a nice open space, away from the noise and exhaust of the engine, and in full sun, and here also was the best place to appreciate the infinite flatness of the sea stretching out to flat horizon on all sides of the ship. This is really what I wanted to see on my trip – the opportunity to get to grips with the vastness of the planet, when you’re edging across it at sea-level and at 17 knots. The boat felt like it was constantly at the centre of its own 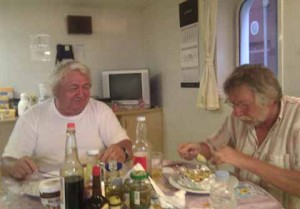 My two German companions for 18 days

circular planet, and that if it moved forwards just a little faster it would outrun it and drop off the edge, always waiting just over the horizon.

Every day the sea seemed a bit different – the first few days we had quite grey, rainy and windy weather, with the ship rolling a fair bit, but as we crossed the Atlantic this gradually improved, until we were in the piercing sun of the Caribbean. The sea turned from deep dark indigos to a regal, shimmering blue, and the waves changed from the grey hulks that rolled against each other nearer Europe to playful edge of froth surfing over the ocean – the surface was never completely flat.

In the 18 days there were also a few specific ocassions when something new and special would emerge out of the never-ending seascape. Twice I saw jumping fish arcing away from the surface and back again, and once the fins of 2 dolphins right next to the ship’s spray. Birds would occasionally find their way to the ship hundreds of kilometres from land and fly with it for a while, and when sailing out of the rainclouds nearer Europe the ship would be surrounded by its own rainbows. Some of the most amazing things though were the flurries of flying fish that seemed to inhabit the surface of the sea right across the ocean. These small fish leap out of the spray of the moving ship, flapping long, thin side fins that buzz like dragonflies’ wings, letting them skim horizontally 50 feet or more over the waves before diving back under.

The ship stopped in Jamaica and in Cartagena, Colombia, before getting to Guatemala, and in Jamaica me and the passengers were able to get off and explore a little, but with very little time on a Sunday, we didn’t get much further than a bar near the water in Kington. On the 16th November however, we got to Guatemala where I disembarked, and now I’m making myself accustomed to life in Nicaragua, where I’ll be for the next few months. The next article (very soon) will go into more detail about the point of the flightless travel so far, and what difference there is in the carbon footprint of these sorts of travel, and I will put some photos up of Central America soon.